FODH Juvenile Club Of The Year 2022 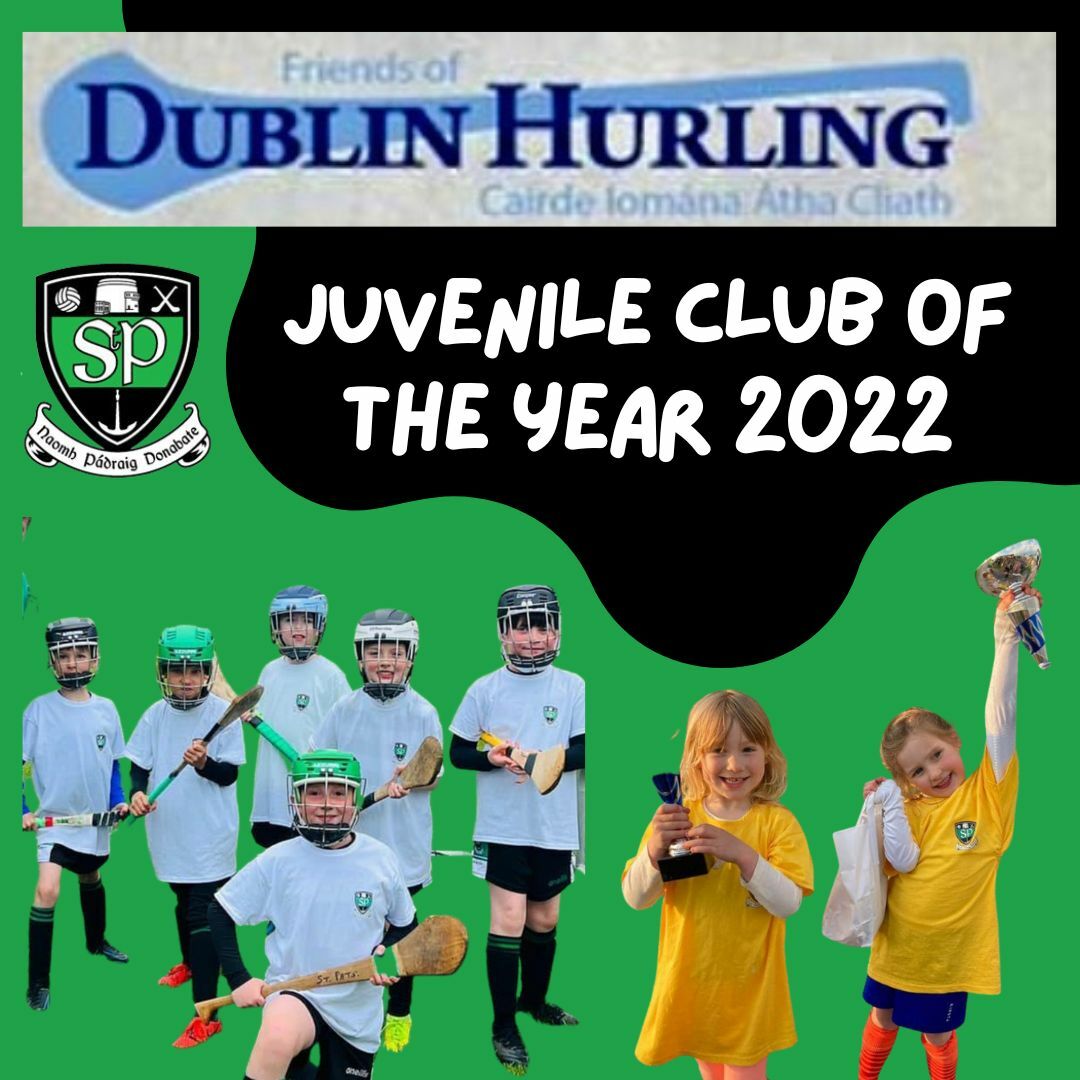 The Club is delighted to announce that we were awarded the 2022 ‘Juvenile Club Of The Year’ award on Saturday night from the Friends Of Dublin Hurling.

There‘s been a huge amount of work out into developing Hurling and Camogie. We’re indebted to all of them for their efforts and we’re delighted to share the fruits of their success.

“There was a time when the sight of a young child in Donabate Portrane with a hurl and sliotar in their hand was an unusual sight. GAA meant football only and the small ball in the parish was a rarity.

Not so these days where hurling and camogie have become staples in our Club. Head down the beach, to Newbridge House or to any housing estate and you’ll see children pucking the ball about. And the best thing is, they don’t even realise the joy it brings to our Hurling enthusiasts to see it being so firmly embraced that now we can’t imagine it any other way.

There have been attempts to introduce juvenile hurling in Pats over the years. After a 10-year hiatus, in September 1999, we entered U8, U9, U10 & U11 teams in the hugely popular Gormanstown Indoor Hurling tournament. Following that, we were able to enter teams in the U9 League.

Unfortunately, this didn’t last and those that were interested in Juvenile Hurling were referred to our colleagues in Wild Geese for Hurling and Fingallians for Camogie.

Our Adult team began with a friendly against Wild Geese which led to us entering the Leagues in 2010. Having a flagship adult Hurling squad piqued the interest of a number of our juveniles who would head down to support the team and see how the game was played.

A decision was made to introduce Hurling - and later Camogie - at our Saturday morning Academy in the hope that it would take hold there and eventually filter all the way up through the Club.

Well, it’s more than become the norm! We’ve over 150 children playing at U4, U5 & U6 on Saturday mornings and more than twice that number fielding at every age group from U7 to U14 in Hurling and U7 to U12 in Camogie.

Fruits of this labour of love are evident in the fact that we have a young lad with the Dublin Development panel this year. We can’t even begin to tell you the swell of pride that was felt when that news filtered through. It’s not that we didn’t immediately picture him lifting the Liam MacCarthy – we’d be lying if we didn’t confess to that. It’s more that we felt that we’d made it – no one batted an eyelid that a lad from Pats would be considered. We were no longer the new boys on the block.

All the help from County Board, from FODH, from Fingal Hurling and from the stalwarts of Hurling in Donabate & Portrane had produced what would be seen as a totally normal albeit delightful achievement in any other Club.

This year to top it all off, the Clash Of The Ash hit the parish with a bang in our second ever Hurling Mini All Ireland. The MAI football tournament is a regular annual feature on the schedule of events in Donabate. In June 2019 a smaller low-key hurling version of the tournament was introduced. Covid restrictions scuppered a repeat performance until this year.

The revival of the Mini All Ireland Hurling and Camogie Tournament for 2022 was even bigger than envisaged success. 300 children – ~200 Hurlers and ~100 Camogie players - competed for the coveted Cup in their age sections.

With the football tournament recently branching off into separate boys and girls sections, the hurling event did the same. With camogie in its infancy in the club, it’s testament to the rapid development of the sport that well over 100 girls applied to compete in the camogie section across a number of age groups.

The quality of the games meant there were truly exciting group stage games with penalty shoot outs required in some sections to determine placings for Finals Day. Best of all for us elder lemons was the secret joy expressed through subtle sideline nods – Hurling’s taken root in Donabate and it’s only getting bigger and better.”

As Ravens pitch is unplayable, the match will take place ...

The Club are pleased to announce the new managers of the ...

U19 SemiFinal this Sunday

The good news from our young lads continues. On Saturday,...

U21 Championship Final this Saturday

We’ve just been advised that the venue for our U21 lads F...

Are you involved with our Juvenile Section..?

Huge thanks to all who help out with our juvenile player...